What Karate Means in Japanese

The straightforward meaning of karate is ’empty hand’.  In Japanese, ‘Kara’ means empty, and ‘te’ means hand. It is written as follows in Japanese: 空手. Originally, it was written 唐手, which means ‘Chinese hand’, or more literally ‘Tang dynasty hand’.

Although Karate originated on the island of Okinawan, off Japan. Karate has Chinese origins. In the 14th century, trade was established between the island of Okinawan and mainland China. Besides goods, the Chinese brought over many aspects of their culture, which included karate. Hence its original name ‘Chinese Hand’.

Karate is so called, as it’s a form of unarmed combat. It uses a combination of punches, kicks and smashes, using hands, feet, legs, and elbows against an opponent.

The Philosophy of Karate

Karate ideology draws on Buddhist believe heavily. The ’empty’ aspect of karate also has another meaning within the philosophy in a Buddhist way. It is seen that ’emptiness’ is a form itself. That as a true Karate practitioner, you must purge or empty yourself of selfish and evil thoughts. As a karate practitioner, it is expected you will not easily be drawn into a fight. That you’ll only use your skills in the rare circumstances when it’s needed.

If you’re interested in learning karate, get in contact with us today. We have classes available for kids aged 6+ and for adults. Remember the first class is free! 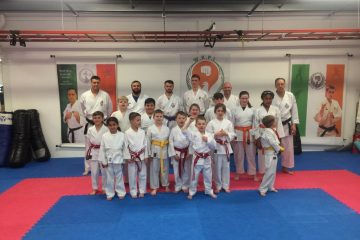 7 Good Reasons Why Reason Why Your Kid Should Do Karate

When I was young, it wasn’t a question about doing a sport. The only question was what kind of sport? With my parents working day and night, the last thing they wanted was to have Read more…

3 Reason Why Karate is Perfect for Self-Defense

3 Ways Karate Can Work in a Real Fight

We often get asked – “Can Karate work in a real fight?”. While karate isn’t a street fighting martial art like Krav Maga or Brazilian Jiu-Jitsu; there are various aspects of karate that can definitely Read more…